Project Name : TimingSwap
Project Track : DEFI
Team Name : The TimingSwap Lab
Team Member(s) : 2
Project Goal : To creat the first (on the EVM chain) chain company structure of the world implemented by code, needn’t to trust. Its shareholders was creat by TimingSwap itself through the code has been written in it.And we called it POC(Proof Of Contribution) including POS(Proof Of Staking) and POT(Proof Of Trading) in this project , Which maybe can make the world much more transparently!

Project Repo : [https://twitter.com/TimingSwap ]
[https://github.com/Timingswap ]
[https://Timingswap.org]
Project Details :
Introduction
The added functions of Timingswap compared with uniswap v2 are described as follows according to the Contract Name:
1、 Factory:only the statistics function of LP tokens in different pairs is added.The function of restricting the feeto address is added through the timelocker variable. After 100 blocks of the feeto address are set, the feeto address cannot be changed by the feetoseter…
2、 RouterV2:add the transaction volume statistics function getnumber for token-eth transaction pairs (the transaction volume is calculated based on the main network currency ETHER), and add the minting distribution function mintto of Timingtoken (ensure that the exchange will not cast Timingtoken repeatedly by comparing followblock and lastblock, so this function is defined as public and can be called by everyone), The distribution of Timingtoken is divided into two categories, which are different for traders and liquidity providers:
① The method for traders is to multiply the proportion of each trader’s statistical trading volume in the total statistical trading volume in each block by 47.5% of the total minting volume of the Timingtoken in each block.
② The method for liquidity providers: first, according to the proportion of the statistical trading volume of a pool in each block to the total statistical trading volume in the block, multiply by the proportion of LP token supply volume of liquidity providers in the pool, and finally multiply by 47.5% of the total minting volume of Timingtoken in each block. It should be noted that LP providers of liquidity mining are recommended to pay attention to the reserve of TLP of timingguard contract at any time, and timely call its convertweth method to convert TLP into Weth to improve their mining efficiency.
③ 5% of the total minting quantity of Timingtoken in each block is mint to the devfund’s address.
Total minting capacity of Timingtoken: it is designed according to the principle of halving every 1000000 blocks. The theoretical total supply is no more than 20 million. The output of each block varies with the time of block out in different main networks (for example, the BSC main network has 20 blocks per minute, so the initial output of each block is designed to be 10;) , the corresponding Timingtoken of all Timingswap blocks without transaction volume cannot be digged out (equivalent to be burned).
3、 TimingGuarder:The feeto service charge of Timingswap is increased from 1 / 6 of uniswap v2 to 1 / 2, and the TimingGuarder contract address is setted to the feeto address. The contract has two main functions: function convertweth and function getback: ① function convertweth is used to convert all the service charges (the service charges are entered in the form of LP token) into weth. This function needs to be manually called by the user to obtain the latest baseprice (calculate the base price according to the weth stock in the contract corresponding to the total supply of Timingtoken at this time); ② the function getback is to automatically return the corresponding number of weth to the address of Timingtoken senders according to the base price in the contract and burn the Timingtoken in the contract.
4、 TimingToken: The ownership of Timingtoken has been transferred to the router contract, The token contract is based on the sushi token contract, only minor modifications are made, and the function burn method, function Tapprove authorization method and function transferfrom method are added. 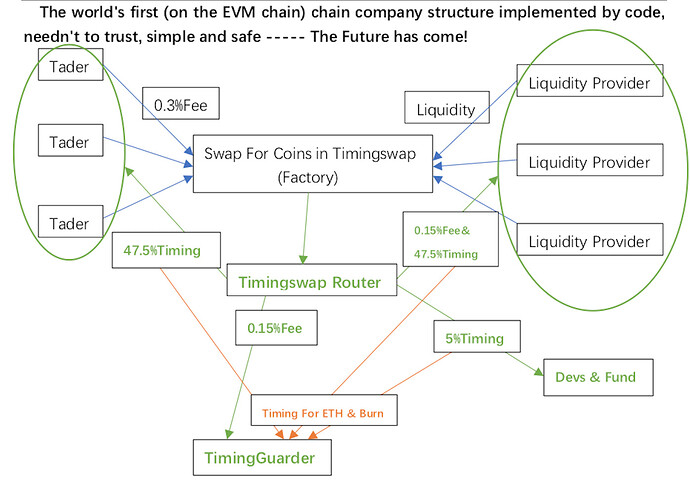 Project Milestones :
February 28, 2022: Complete the final test of the TimingSwap to make sure it is safe enough for its user.

Thanks a lot to WAT2519, and it is not just a coin，it is the shares of the project。Everyone can mine it by POC as its introduction said。

this is nice, good luck♥

Thank you very much.

Yes, We will try to find a simple way to explain it.And Thanks very much.

Thanks very much.We will try our best to do it.

To disrupt the DEX market, implementing an innovative incentive model is crucial. The combination of POC (Proof Of Contribution), POS (Proof Of Staking) and POT (Proof Of Trading) sounds interesting. I’m curious to see how you will manage to attract users and get them to participate.
Will follow your progress! Good luck!

Actually TimingSwap will become their own DEX who participated in it,Because they will get 95% of its shares. and it will be a real Decentralized Swap,and the shares will share half of its earning all the time untill the shares were sent to Timingguarder Contract for their interest and those shares will be burnt by it.

February 28, 2022: Complete the final test of the TimingSwap to make sure it is safe enough for its user.

Hello, are you making progress with the test phase ?

It has been depoyed at BSC and OEC to test it,you can find the contract address at github,and I think it is safe for its users.