Oracula - The Oracle for Everything

Project Name: Oracula - The Oracle for Everything

Team Member(s): 3, @laplacesdemon (adding others soon when they join the forum)

DevPost URL: Oracula - The Oracle for Everything | Devpost

Deliver a oracle that can answer any binary question you can think of, with the help of game theory. Oracles like ChainLink and WinkLink are great at providing financial data, such as the price of BTC at a given time. However, they are not good at providing answers to questions such as “Did England win the Fifa World Cup 2022?”. We wanted to create something that can any answer any binary question (which in theory means every question, not just binary).

This is why we created Oracula, an optimistic oracle. With a functioning optimistic oracle, tons of applications can be built on top of it such as prediction markets, insurance products and lending markets.

The Oracula oracle allows anyone to ask any binary question, and to get it answered on-chain in a reliable way. This is achieved by utilizing the game theoretic concept “Schelling points”, together with the power of a distributed token.

Oracula is what’s called an optimistic oracle. The optimistic part comes from the fact that when an answer is proposed to the blockchain, it is ASSUMED to be true UNLESS it’s disputed.

Every question start with these 2 steps

If an answer is disputed, then the question goes to “the court” where token holders vote. When the token holders vote, Oracula uses a “commit-reveal scheme”. It means that you first commit your vote on chain, and later reveal it. When the vote is commited, no one else can see what you voted on. Later in the reveal-phase, you reveal your vote and then everyone can see it.

The image below shows the question flow in detail: 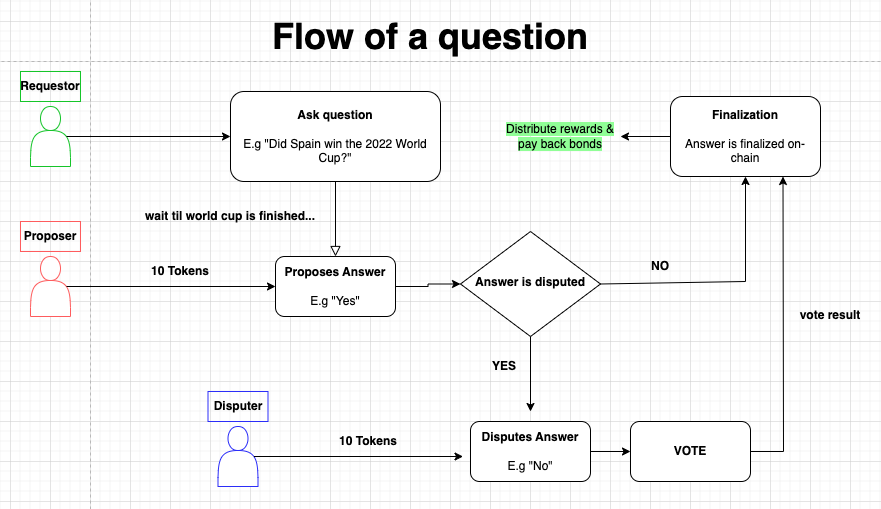 And this is an illustration of how a commit-reveal scheme works: 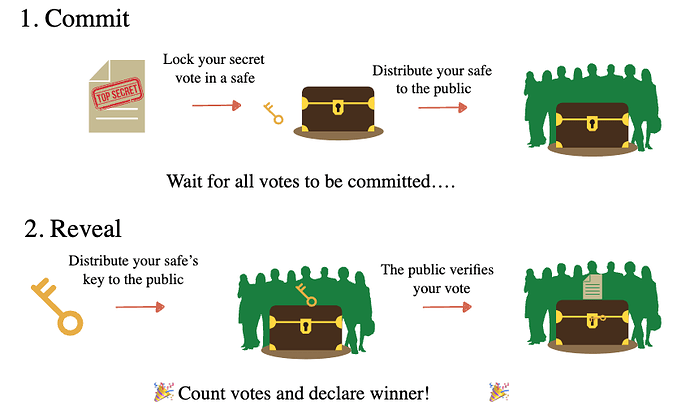 interesting! watched the video and i almost understand

Really sweet how you can create election market with this, you can right? This might be super popular during the election 2024.

Niice! Really great project! I’ll definitely follow up on this one!
The faucet didn’t work on my side, maybe you can check this out.

Just ask if you’re wondering anything!

Yes you definitely can. Virtually every market can in theory be created by a combination of multiple binary markets

Thanks friend! That’s odd, I just tested the faucet again and it worked, did you test on BTTC mainnet or testnet? Here is a faucet for BTTC token on the testnet btw BTTC Faucet, and then on oracula you can hopefully get oracula tokens (if you have BTT tokens) which can be used for proposing and disputing

Sorry my bad it works, i was thinking it was a BTT token faucet, which i didn’t have.

Kudos on this project

Very good stuff. One of my fav projects so far

I’ve been wanting an oracle just like this for years now. Thanks for building. Will keep up with the updates. Good luck!

This is as a matter of fact very enlightening. I have surged the internet for a more explanatory content about oracula and this just solves us. Great work

You have a made a relevant submission about how it can be put to use indeed. I hope he can move to try it out as you suggested

interesting, took my time to read. worth it

It was very insightful reading this.

got through the vids. it’s understandable