PostThread - A Decentralized Social Media for Everyone 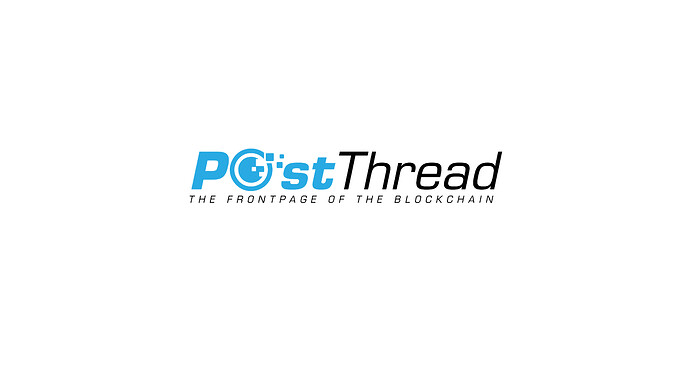 Logo 015692×3200 419 KB
Project Goal: Depolarize the world by providing a social media experience that doesn’t take advantage of its users, but instead rewards them.
Project Info: PostThread is a web3 social media app that rewards it users instead of extracting from them. To do this we use blockchain economics that encourage users to post quality content and curate the platform.
Project Repo/Website: Check out a demo of the website at https://postthread-tron.netlify.app/
GitHub - iamianM/PostThread-Tron
Project Details: You can currently create a user, post, comment, upvote, accept daily rewards, link accounts, and claim your airdrop. However this is just a prototype so you should not expect to receive any actual reward. A transaction of 0 tokens is submitted when claiming.
Even though you cannot earn, you can still interact with the site as you would any other. All interactions are stored on the blockchain and IPFS.
Who knows, maybe we’ll reward some of our first users when we make it big 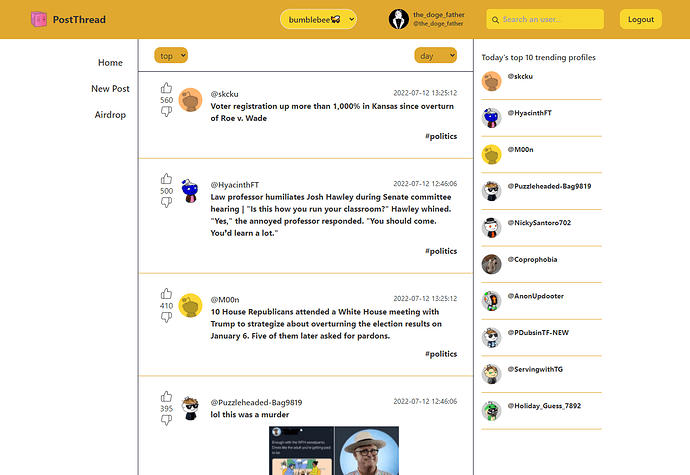 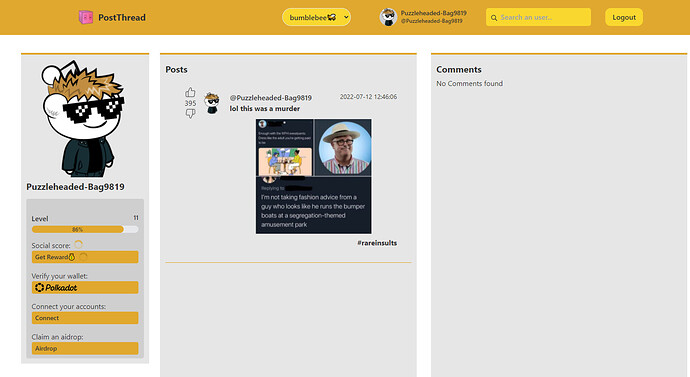 Keep in mind the site is a prototype and all users will have a password of password. Also we are currently having some issues with minting through the UI, but reddit posts are up.

We mainly used Reddit posts to bootstrap the site and give a proof of concept to what an actual site would look like.
If we offered everything that Reddit offered, I think users would prefer our site since they can own their data and get paid for posting. It’s similar to how defi is trying to offer everything a bank and more except with user ownership. I think leveraging web2 is a good way to speed up web3 development.

Are you planning to integrate a monitoring system in your decentralized social media?

The data will be open source so we are planning on having community rewards to incentives users to help analyze the data and create useful features with it.
One idea we have is allowing users to pick the algorithm they wish to have present posts to them and these algorithms could be designed by the community. For example, I consider the TikTok algorithm to be quite powerful and I think it provides me with very interesting content so I could select that algorithm but at anytime I could switch to the Instagram algorithm if I’m in a different mood or am unhappy.
Of coarse we don’t know how these algorithms work in the current state of web2, but PostThread algorithms would be open sourced and potentially have a page you could visit that explains the data that was used and how. Just another way for individuals to have more control over their social media experience.

Thanks for your answer. I would really appreciate if you use the reply button to answer your users’ questions. Thanks

Unfortunately someone managed to steal the funds out of the wallet that was minting posts. I have no idea how they did it so will need to check the code and change the wallet. So until then no new Reddit posts will be created and users can not create anything. Sorry about that.

What do you mean by quality contebt please? Is there any definition for that within the project sphere?

all in one social media app might be overwhelming as having some key features has more astounding impact on the of number of usage and attracting the people. Also, does it mean people will select their own design for social media in one platform?

It would be up to the community to decide. It could be just from the most upvotes but I think an algorithm developed by the community would be more robust and harder to game. I think it is possible to get to a point where something like a recommendation algorithm could also be designed by the community, such that there are competing ones and users have the opportunity to select the one they want. This would be another step in empowering users to customize their own experience. Would help in understanding what is quality content as well.

PostThread is all about giving power back to the user so yes, we want the user to customize their experience. I think if it as a modular social media app. Where any member of the community could make an extension, ui, algorithm, component, etc and it could be used by any other user. This is another way to embrace the open source nature of the Blockchain. It could be our job to set up the system for others to get involved, that way we wouldn’t have to spend too many resources on things like multiple UIs.