Project Goal: To become a liquidity-as-a-service on Tron with high yielding NFT-based veConomics (opening up opportunities in secondary markets for selling locked positions).

NOTE: The Project is currently deployed on Polygon Mumbai Testnet EVM - the deployment scripts and frontend can be modified accordingly for them to function with the TRON VM

Sushiswap was the first notable DeFi platform to enable its Liquidity Providers to opt into passive rewards which accrued overtime (that is, not just limited to governance tokens), with the condition they keep their assets illiquid. Curve built on top of this innovation by introducing the space to its highly innovative and effective Vote-Escrowed mechanics, which enabled users who locked their CRV which they received by staking their LP tokens in exchange to have voting power over liquidity gauges, which effectively gave the community power over how rewards were allocated to their plethora of liquidity pools, and soon integrating this with a clever bribe system where voters would be rewarded depending on how they allocate their votes sparking an epic saga which many dub as “The Curve Wars” – where protocols would fight for their liquidity pools to be as attractive as possible to investors by “bribing” veCRV holders to allocate more of their votes to their pool.

What if such mechanics could be taken to the next level?

Participes Finance – with its innovative Financial Vote-Escrowed NFT Lock system and built-in Gauge Voting IS the next level, a platform where locking up positions for voting power doesn’t necessarily mean that the position is essentially illiquid….

Much like Sushiswap, Participes Finance has it’s own assortment of Staking pools for users to stake their liquidity tokens – but these LP tokens are not native to the platform. This is an important feature of the platform – Liquidity-as-a-service. These LP tokens are intended to be LP tokens from other platforms, and depositing these tokens is the first part (pun intended) of the user’s journey to maximize their returns on the platform. Staking these tokens allow the users to earn PARTS (Participes’ equivalent to SUSHI from Sushiswap) proportional to their share of the pool and the emission rate allocated to that pool.

2 – xParts NFT and the Revenue Vault

Sure, making some PARTS is nice, but if you want more, you gotta give just a little bit more (just like that quote from Full Metal Alchemist: “To obtain something of equal value must be lost” (sorta)). Everything becomes full circle with PARTS hold opt. in to lock their PARTS for an xPARTS fNFT lock position (minimum 1 week – maximum 4 years) – allowing them to earn weekly rewards – of which is currently set to be 95% of staking revenue. Where does this revenue come from? Remember those tokens that were deposited into the Participes Staking Pool? They were deposited into strategy contracts which manage the assets (staking, withdrawing, harvesting rewards) in third-party pools, and the rewards are accrued weekly where the user can simply claim them to reap their profits. The users’s voting power is a product of their lock time and the amount of PARTS they locked into their position compared to the rest of xPARTS in circulation. Why an NFT though? Why can’t we just use a non-transferrable ERC20-Like token instead for xPARTS like Curve does with veCRV? Well, utilizing a transferrable NFT Lock position instead of a veCRV-like token ensures the underlying PARTS and LP tokens are illiquid – yet the position itself is liquid – hence opening up opportunities to liquidate that position in secondary markets, essentially acting as a special type of bond which can be sold to others to buy into the protocol’s revenue stream. An NFT Marketplace for these sorts of assets are planned to be released in the future as part of this project’s roadmap. The diagram below visualizes the essential components which play a critical role in (1) and (2). 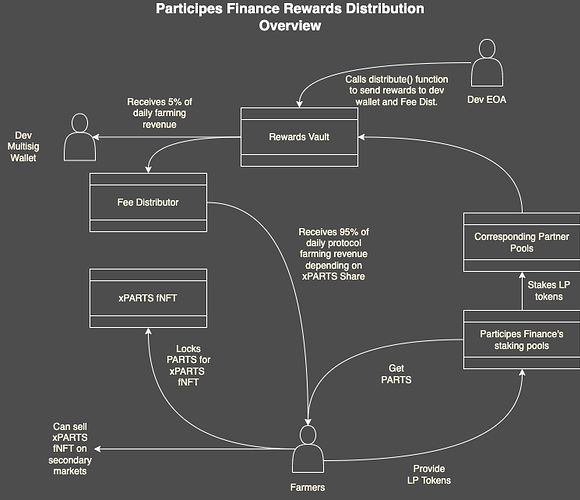 Participes will integrate functional gauge voting in the future. The groundwork is already there, just needs some modifications to fit into the puzzle. The visualization below provides an overview of how it may function: 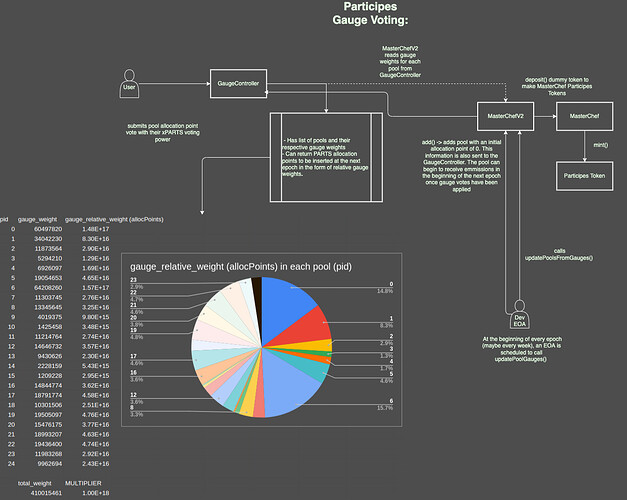 NOTE: The Project is currently deployed on Polygon Mumbai Testnet EVM - the deployment scripts and frontend can be modified accordingly for them to function with the TRON VM

When did you plan to start building it on Tron? Normally you should have a video showing that the product works on Tron ready for today. Maybe the organisation will consider that you can have until the voting period to provide it (1st of August) but it’s time to speed up to have something to show.

TRON uses a different algorithm for both generating addresses and for signing transactions - which means that the libraries that have to be used for interacting with the smart contracts from a frontend client and deployment scripts will be different (hence why I decided to deploy on Polgyon). That’s all, the smart contracts (which are written in solidity) will function on the TRON EVM much like it doe on Ethereum, Polygon, and almost every other EVM-based network I can recall.

I don’t dispute that fact. Just saying that it’s Tron Hackathon and that the judges will base their opinion on products built on Tron and not on ideas implemented on other blockchains. Hence my question.

TRON actually uses TVM, it’s slightly different so some work on integration will be needed.

The chain which is fully EVM is BitTorrent Chain.