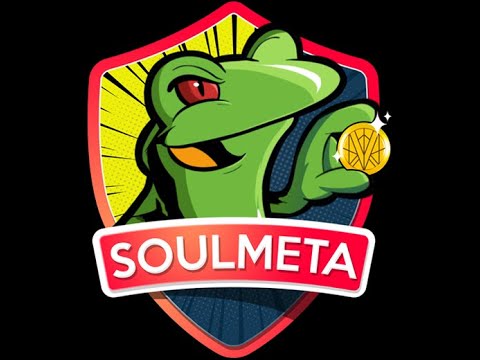 According to the “Survey Report on Social Concepts and Social Relationships of the Post-95s”, over 80% of the surveyed users regard social software as an important way to expand their personal circles.According to data from the Mob Research Institute, among the born groups from 1995 to 2010, 56.4% of users prefer socializing with strangers compared to the masked and utilitarian social circle of acquaintances. The needs and pain points do exist.

Since a large number of celebrities and sports athletes have issued personal NFTs in the second half of 2021 and sold them in Opensea, more and more ordinary people hope to obtain possible benefits through trendy encrypted works such as NFTs, especially in the global epidemic environment. As Japanese actresses, industry celebrities, models, sports and entertainment stars have begun to participate in the minting and sales of NFTs, this market is gradually moving towards a wider group of ordinary people. However, the current market threshold for blockchain NFT minting and marketing is a certain threshold for ordinary people. SoulMeta tries to help ordinary users to join the NFT nuggets trend with the least cost and the lowest threshold through the simplest humanized interaction operation.

What problem we are trying to solve

In the face of the great potential of the stranger social market in Web3, SoulMeta will focus on the establishment of stranger social relations, the biggest pain point of current social interaction. At present, most SocialFi blockchain projects focus on how to enrich the functions of decentralized social networking through blockchain technology, in an attempt to attract users through its functionality. However, the lack of social networking in today’s society has never been a tool, and the social software developed based on the current level of development of blockchain technology, whether in terms of performance or richness of functions, it is far from being comparable to centralized social software.

The main participants of the SoulMeta platform are blind box minters, blind box buyers, and referrers. Blind box minters can pay 4USDT to mint their contact details and photos into 100 blind box NFTs and inject them into the smart contract pool. If a user obtains the minter’s contact information by purchasing a blind box, the minter will receive a 25% commission reward, which is 1USDT. If the minted 100 NFT blind boxes are all opened by other users, the mint will get a total of 100 USDT. Blind box buyers can purchase a blind box by paying 4USDT. After opening, the purchaser can randomly obtain a minter’s contact information, and can gain 1 SOUL token through SoulMeta’s transaction mining mechanism at the same time. The platform referrer can recommend other users to participate in the social networking of the platform through the invitation code. Whenever the referred user mints or opens the blind box, the referrer can get a 25% commission reward. 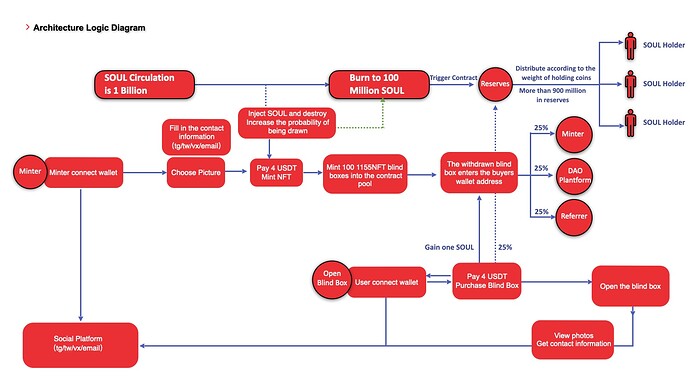 SoulMeta does not require users to complete KYC authentication, it will be a truly decentralized SocialFi application. Users can earn USDT income by minting their own NFT blind box on the platform, and can also earn Token income by opening the blind box.

For each blind box sale, 25% of the revenue will enter the public reserve contract pool. When the SOUL Tokens are destroyed to 100 million, the USDT in the contract pool will be released to the users who hold SOULs.

As long as you mint your own social NFT blind box, you can get an exclusive referral address, recommend others to participate in minting, and get a 12.5% sales commission for each minting and purchase.

All SOULs are mainly generated by purchasing blind boxes, and each blind box sale will generate 1 SOUL to the buyer. Neither the development team nor the organization has SOULs, and 15 million SOULs are locked in the contract. Only when the team assists in completing the destruction of SOULs to 100 million will this part of the reward be released. This will ensure that the team can continue to focus on the platform and benefit with all Token holders.

CryptoD.Frog NFT is a kind of equity NFT with actual value support initiated by SoulMeta stranger social platform. This kind of NFT not only has the characteristics and artistic value of the common avatar NFT, but also represents the dividend right of the income generated by the SoulMeta platform. The total amount of CryptoD.Frog NFT issued is 10,000, each of which will hold 1/10,000 of the equity of the SoulMeta platform. At the same time, since SoulMeta is expected to launch its mirror version on 9 NFT-enabled blockchains, this NFT holder will enjoy the benefits of mirror versions on other blockchains as well.

SoulMeta has established a reserve pool in a decentralized way. Every time the blind box is minted or opened, 25% of the revenue will go into the public reserve contract pool for reserve. The algorithm destruction mechanism refers to the fact that blind box minters can increase the probability of their own NFT blind boxes being opened by burning SOUL tokens during minting. The total issuance of SOUL token is 1 billion. When the SOUL token is burned and destroyed to only 100 million, the USDT in the reserve contract pool will be released to users who hold SOUL token. Each CryptoD.Frog NFT can receive 1,500 SOUL tokens locked in advance through the smart contract when the SOUL destruction target is reached. According to the official destruction mechanism, the floor price of each SOUL token will be greater than $9 at that time.

According to SoulMeta’s official document description, each time the NFT blind box is opened or minted, 0.8USDT or 1.2USDT will be injected into the dividend pool of the CryptoD.Frog DAO respectively. Each CryptoD.Frog NFT holder can receive the SoulMeta platform’s blind box sales dividends from the CryptoD.Frog DAO in real time through the number of NFTs they hold. 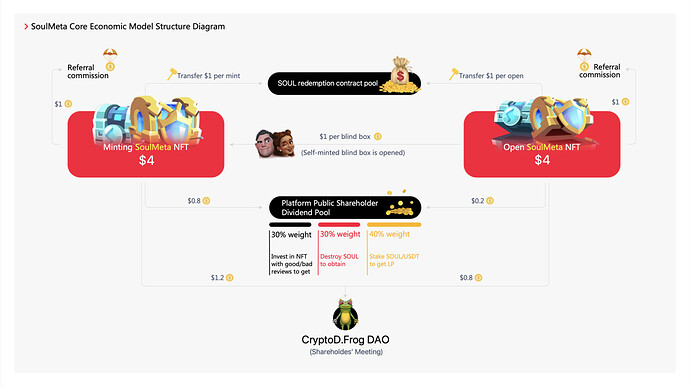 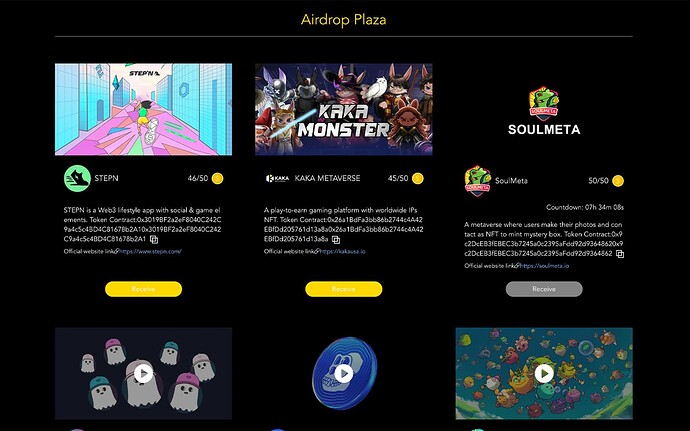 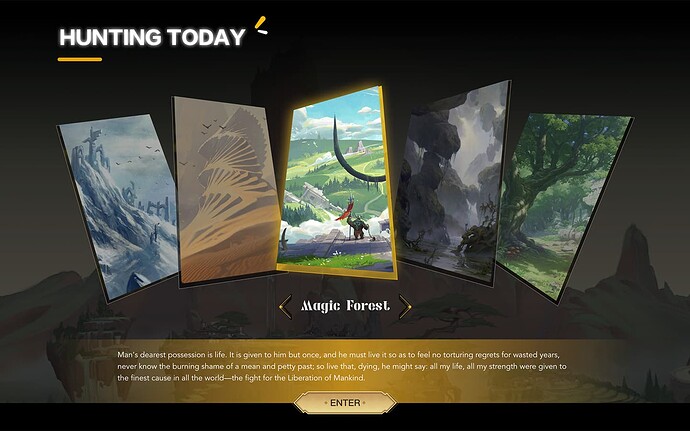 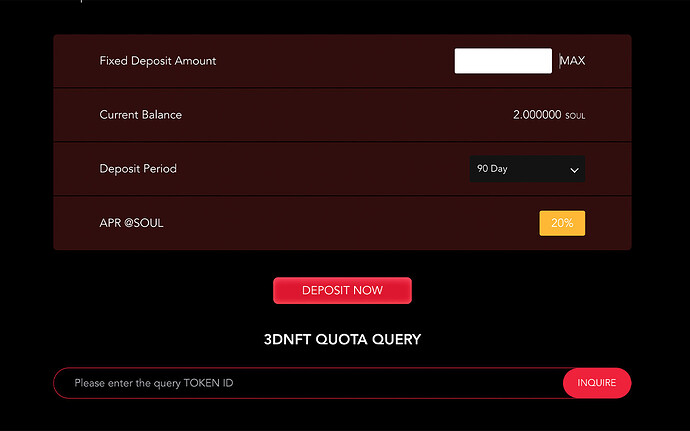 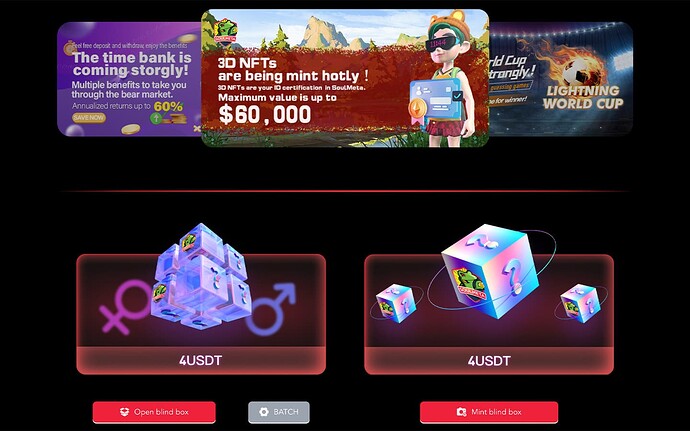 Are you currently building on Tron? Bttc? Both of them? When will the platform be ready to launch officially on tron/bttc? Thanks

The project technical team is working hard to develop it, and it is planned to be deployed on Tron by July 18, 2022. The team has no plans to deploy on BTTC yet, but may consider it in the future. Thank you for your interest in the project, and if there is anything else you want to know, please feel free to ask.

Have you attracted any big names or celebrities to do a blind mint box? Or plan to?

After the SoulMeta technical team completes the deployment on Tron, the SoulMeta operation team will launch a series of promotion activities, including but not limited to airdrops, AMAs, etc. If you are interested in the project, please follow SoulMeta’s official Twitter (https://twitter.com/SOULMETAVERSE) to get the latest official news.

@SOULMETA so this is already up and running on BSC now? and you want to add the Tron network correct?

First of all, thanks for your question. In fact, you can find the answer from the Roadmap section in the SoulMeta project’s whitepaper. When the SoulMeta project was framed in the early stages, it had a multi-chain plan. The project is planned to be deployed on multiple chains including BNB Chain, Polygon, Tron, and Solana. The deployment of the project on the Tron chain is an important part of the entire project. We believe that multi-chain is the future of blockchain development, which will help the diversified development of the blockchain industry and the drainage of users between different chains.

Love to see SoulMeta on Tron! We have published an article on our website. Best of luck!

awesome project, as a web3 developer i know all the hard work you had to put behin this great technology

we’re with some names and seeking new partnerships, we’ll announce it on the right time on our discord