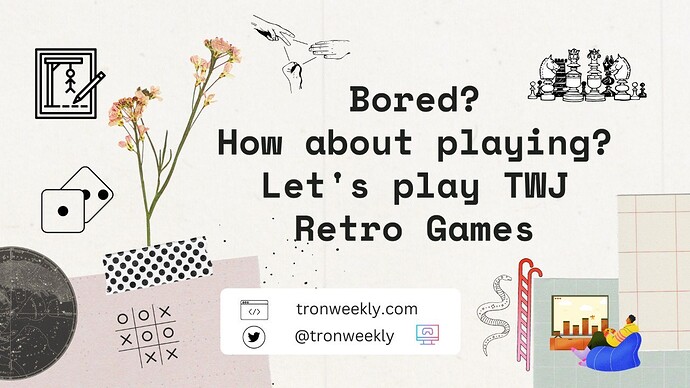 Remember your childhood days when you used to wait for the newspaper to play fun games on it? With TWJ Retro Games we wish to bring back the same experience; in a Web3 form. TWJ started with the sole purpose of providing quality content about the cryptocurrency industry unblemished by any external factors and influence. As our readers continued to trust us with their daily dose of information, it became clear that we needed to up the ante in terms of native features. Since founding the platform in 2019, we have ensured our milestones coincide with what our users need. As a first step towards this endeavor, we have laid the foundation of Web3 TWJ Dao to bring in more decentralization and global spread of decision-making. Our latest venture into the Web 3.0 gaming sphere is a natural progression to elevate the website and the TWJ community. 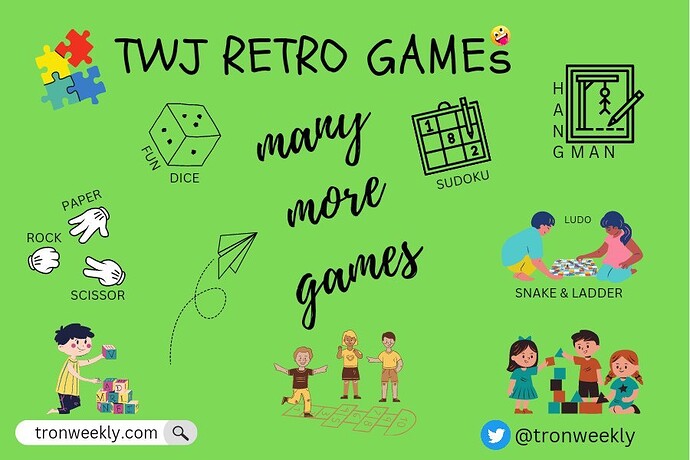 Retro games bring about an innate sense of nostalgia and belonging that is had to capture in today’s age. TWJ’s inclusion of these old-school games is an attempt to engage and unite our readers in a space where the next revolution is set to take place.

The core of the initiative is having Fun. That’s exactly what this project is all about. Yes, one can earn as well with the P2E concept built into these games. TWJ offers a wide array of gaming options with genres ranging from nostalgia-invoking Tic Tac Toe to the widely popular Monty Hall problem. TWJ created the games on the Tron blockchain with the aim to make them as fast and easily accessible as possible. Apart from the sheer enjoyment, these games also perform the duty of integrating several users into Web 3.0 without any hassle. TWJ also has plans to expand its gaming library to include more classic games to tickle the imagination of our readers. Do let us know in the comments which games are you nostalgic about.

Hurdles along the way

One of the most crucial aspects that TWJ focused on was the security of the funds garnered by the users. Since the build was on TronWeb, a small issue of configuration cropped up which was rectified by the TWJ tech team. As all the important processes happen on screen, it reassures users that “what you see is what you get”.

One of the targets TWJ wanted to achieve was to make its readers familiar with basic processes in the world of cryptocurrencies. Hence, one of the first steps is for readers to link themselves to TronLink and familiarize themselves with the burgeoning industry. While playing the games on the website, users will also be able to experience the use cases and features of Tron Weekly’s official coin, the TWJ token. TWJ’s roadmap also includes adding higher-resolution games to the website that will fully harness the power of the TWJ token.

The bridge using TronLink was a key part in bringing the website experience and gaming experience closer to each other.

The bigger objective is to onboard more users to the TRON ecosystem! By keeping the process simple it becomes easier to introduce the concept of blockchain to a greater audience. We hope to contribute to increasing the downloads of TronLink browser and also in increasing transactions on TRON Blockchain. 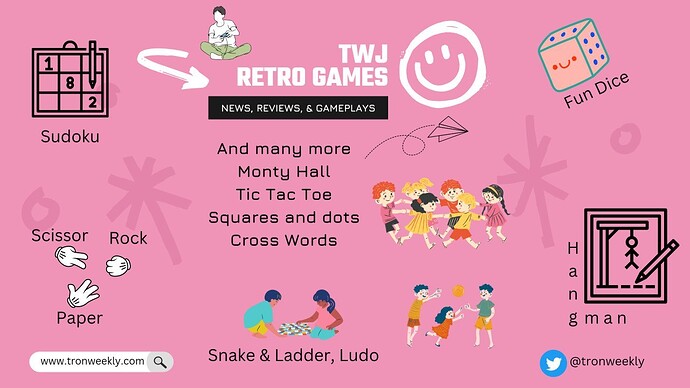 TWJ’s next steps The marriage of blockchain with retro games was a decision made with keeping the future in mind. TWJ realized that building a solution to address the barriers in the industry was a step-by-step process. Over the course of the next few months, TWJ would want to elevate the gamification of the website to the next level. This would include interactive sessions and games for readers of all age groups.

As Web3.0 expands into a phenomenon, we at TWJ would like to reward our users for coming along for the ride. With new readers emerging every day, it is TWJ’s joy and privilege to make the community better, faster, and more streamlined.

Cant wait for this. Lets go

it has a nostalgic feel

Wow, Retro games, that will be brilliant, can’t wait to get back to my youth​:+1:

I visited your site and looks promising. But when i click on any of the game icons nothing happens.

I thought i could test it to see how it all works and not just by words of mouth.
When its ready to be used, kindly update us to try it out.

very nostalgic, love it ! When can we test it?

Few games will be ready in next two days

Always nice to read some news and make a sudoku

Nice, hoping to see a lot of classics here. Good luck with the development!

ohhh this is awesome !!!

Which games are getting launched first ?

Fun dice and Monty Hall single player will be released first .
Integration with UI process is going on

Old school games, loved it when can i play them. Any info on date when it’s online.

Feeling we all will get back to school days and enjoy the memories!

TWJ revoking the childhood to feel the refreshments!

I wish a very successful win

This is something required to make mind refreshing and smooth

What great (Tron Weekly) news, good luck with the development!

spent lot of time with the games page in the newspaper