Project Goal: Build football management game that combines the passion of football with the freedom of web3

We love football like many people around the world (hope, you too).

Also, we like card games and see how this game mode is taking over the world last years.

We decided to mix it

We start developing this idea before Hackathon and we wanna go all the way from concept to working product with first players during this event.

What we’ve already made:

Will the performance of the players be a reflection of the real world players performance?

For instance, if I own Eden Hazard’s card and Eden Hazard is harmed, will my player be harmed as well?

If I own Lukaku’s card and the real one scores 3 goals this weekend, will my Lukaku’s card get a kind of bonus? Better performance?

Hi @fabsltsa and @chookd1!
In the first version of the game, NFT players will not be directly linked to real players because of copyright issues, but once launched we want to move towards partnerships with clubs or FIFA.
Now we focuse on technical realization of MVP and creating best possible gaming experience since launch

UPD#1:
We created amazing NEW DESIGN for NFTBL!
ENJOY and SHARE your thoughts about it here!
Stay tuned 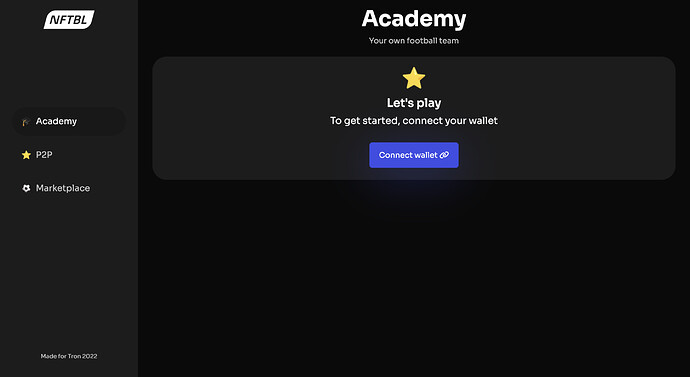 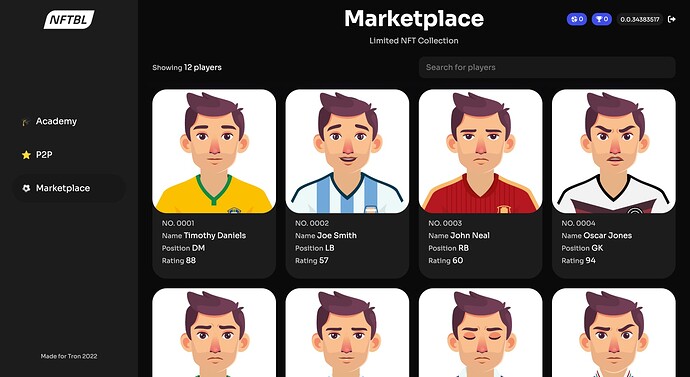 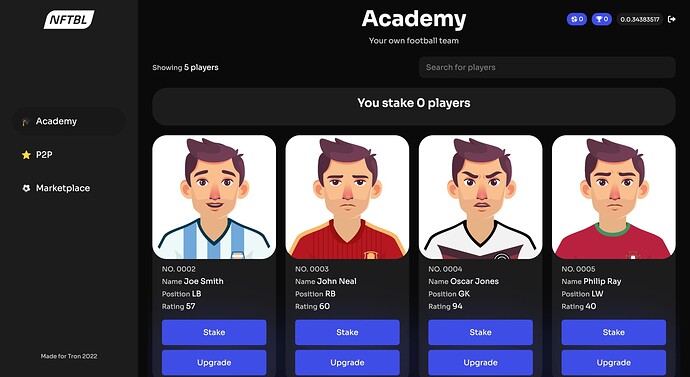 What will be the determinant of the prices of the NFTs will it be base on their normal price on real world?

Thanks for your answer.

Will you need some beta testers?

Which coin/token will be used to purchase/upgrade players?

Hi @Lola!
In the first NFT batch, players will have different characteristics and prices, but no link to real players yet due to legal issues. If you have any ideas how to handle with that feel free to share

Thank you for your willingness to help the project!
As soon as we publish the project for the hackathon, you can try it out.

NFT players will be purchased for TRX. To upgrade them gamers will use inner fungible tokens #BALL and #GOAL. We’ll share details about game tokenomics soon!

It doesn’t seem you have a Devpost URL submission for the TRON Hackathon?
Did you submit your project officially yet on devpost?

We finished many things this week!

PVP matches gameplay (vs bot if opponent is not found)

Can’t wait when you try our game and give your feedback.
Guys, thanks for your support!
See you in game!

Hey, I think you should tag the post with the category you’re competing in! In this case, I would presume it’s “gamefi”

@sergeyaikhel Football manager web 3 Gamefi sounds like a winner if the engagement and rewards are good, looking forward to seeing some visuals for this

Which kind of football are we talking?

We wanna prepare beta before submitting project, so we’ll share link here in next few days. Thanks for reminder

Good luck to the team on this submission.

As a frontend developer in this team, I wanted to say that we have done a great job, a super interesting concept looks really promising and absolutely working. Try it by link in description