Project Details: You can reach out our demo video here .

Hi, we have a question for you. What do you think these people have in common?

They become a fan, and they are ready to defend it. We see that under social media posts, TV shows, and forum sites, people tend to support what they are fans of. However, it is unclear where and how comments or votes are kept, and people may find this unsafe. In addition, the fact that voting systems are not built with a more robust infrastructure reduces people’s trust and, thus, participation.

As MetaVote, we started our journey right here. We have created a blockchain-based forum-voting platform for sports fans, anime lovers, bookworms, those who want to discuss politics, defend their fans, comment, and others. After logging in, users select the categories they are interested in from the main screen. Then they can enter the polls that create the discussion topics they want within the categories. They can vote for the concepts they support in the poll and participate in the discussion from the comment section below.

Project Test Instructions: After logging into the site, you click on a category you like. Then you enter the surveys opened there. For example, suppose you entered the top rated of that week and saw Argentina and Portugal in the World Cup final on December 18. In that case, you will be able to vote on the team you think will win, or you will try to predict the Eurovision finalist country in another poll. Sometimes there will be fun polls, and you can vote without spending a coin. Sometimes you will try your luck in ambitious surveys.

Important Updates:
As we participated in Hackathon Season 2, we had to update our project massively. The significant changes we have made and continue to make are listed below. 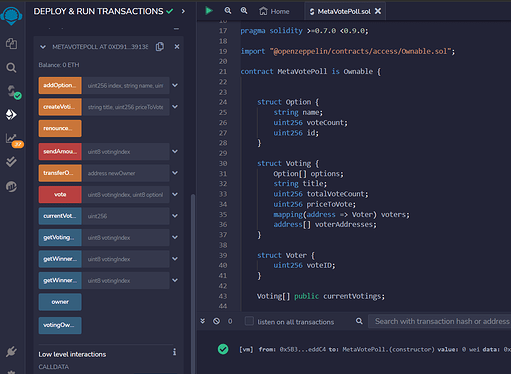 Project Milestones: We are currently working on growing our team and developing artificial intelligence to ensure that the uploaded surveys are offensive and non-repetitive. We are also developing 2 more smart contracts on KYC to safeguard the security of the voting system and the transmission of survey earnings.

Proposal for converting to TRON/BTTC :
We aim to develop the script of the Ethereum software we developed over Remix ide in accordance with Tron-ide, and users will connect it to the Tron ​​wallet instead of any other digital wallet. In this process, voting on our site will now be made using Tron ​​tokens, and the winners’ prizes will be sent as Tron.

I have tried to check the website, nice UI but I think new user needs some guidelines about how it works entirely.

Aaah yes, rn I am going for all details. It’ll be ready quickly. Thanks a lot for your feedback

Have you thought about some solutions to reduce the possibilities to vote several times (with several wallets)? Maybe a minimum amount of trx in the wallet to be able to vote? Maybe voters should hold an nft created by the project?

Yes, they will only have 1 vote because their wallet IDs are personal. The idea of ​​Voters NFT hold also seems very logical, actually, it can be evaluated. Thanks for your detailed comment.

All details about the project will be added in 2-3 days.

Ok, thanks I would really appreciate it

watched the video ,its good

but we have some suggestions for you !

Otherwise , the project is booming
and we will create my poll in music if you let us : )

Thank you for your time

How do you plan to stop people from casting multiple votes by using another wallet and buying another NFT to cast two votes for example? without using some sort of KYC?

this is the edge case . You made me think .
Well there must be a way to do so but apparently , voting based on just NFT and wallet address wont differentiate a person !

i think it has to do with decentralized identity or combination of person’s real world social media accounts…
but those again will threaten the anonymity of a person on blockchain.

i think git-coin passport project does something for that but not sure : (

Yes this was the main concern I had as apart from that we do need trustworthy blockchain based voting systems?

One for KYC and one for token holders

you nailed it .
KYC will be new to me in blockchain

We are happy that you made a quality review and shared your comments with excellent details. I will try to update it as soon as possible

Thanks for this question and comment.
In fact, it is almost impossible to prevent people from voting more than once. Because it is inevitable to use more than one account even in sms structures or creating a crypto wallet. Our aim was to targetting/focusing people to use their personal wallet addresses, which are defined individually, once while voting. In this way, we aimed to create the fairest environment we could. In addition, our design thinking processes on KYC continue. The more justice we can create, the happier we will be.

One for KYC and one for token holders

Seems like a pretty smart option. We will definitely consider it, many thanks for the feedback.

@seemal-arif and @Simon
If we can get an update on the voting system, I’ll let you know directly. Thanks again for the recommendations.

Update: The current version url of the project in Devpost has been published.