To the moon - A Play to Earn endless game

Project Goal: To build a game where you can play to earn without any entry barrier

Project Info: To the moon is an endless game where you will have to take Bitcoin to the highest price level possible. You can either play it for free or you can participate in a daily tournament where you can win a huge sum of money from the prize pool. We have made it free to play because we want more people to experience and engage with the game and once they become good at it they can take part in daily tournaments and can 2-3x their money.

Project Details:
What is the best way to onboard more people on web3?
Ans: Something that they are already familiar with. Right?
And that “something” is Games.

I’ve been playing games ever since I was a kid. I always imagined that one day I would be making money just by playing games. Unfortunately, that never happened, but I found something better: I found a passion and a skill to create games. Games, that will help people to earn.

“Games are a waste of time.” you may have heard this sentence before and Yeah, that was a true case until we began to see the rise of “Play to Earn” in web3 space. It’s basically where you get paid to just play games that you would normally play for free. Doesn’t that sound amazing!!!

We have designed the interface in such a way that even the normal user can play the game, they don’t need to familiarise themselves with wallets or which blockchain it’s on and all that sort of complicated stuff. Which makes it perfect to get more users playing the game and then sort of introduce them to wallets and other web3 related stuff so that now they can play the game and earn money just by playing the game.

We have built daily tournaments in which users can participate by staking a specific amount of coins and if they rank in the top 69% of total users who participated in tournaments then they will receive a share from the prize pool depending on their scores. Which makes it fun for users to play and showcase their game skills and earn accordingly.

A lot of people play games just for the sake of relaxation or just to kill a couple of minutes and that’s why they tend to prefer simple games where a single game cycle is short.

A lot of games that we see in the web3 space are quite complex and difficult to get started cause they require their own NFTs or the Game token to even start playing. And that’s where most users drop off.

Keeping this in mind we have designed the game in such a way that you can get started even without having any wallet installed. Isn’t that awesome!!!

Clone this repo, cd into the folder, and run the following command

Project Milestones: Our goals are to be in order…

Please comment if you have any questions or suggestions for the progress of our idea! Thank you! 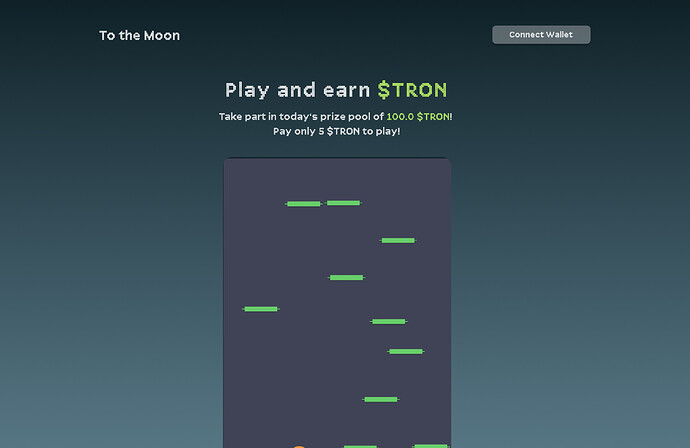 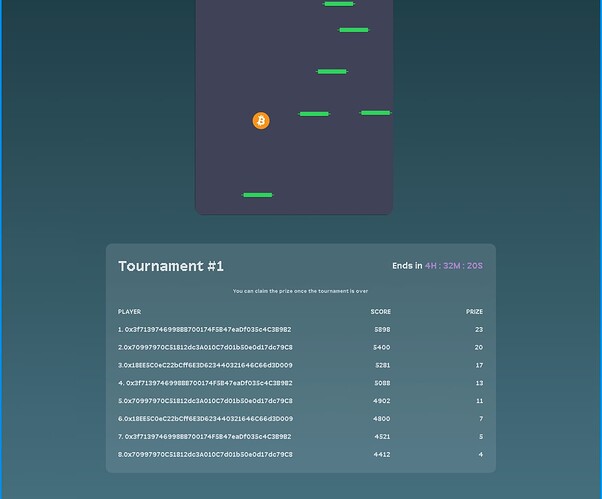 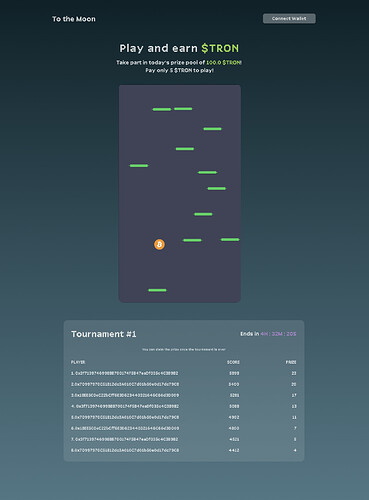 On which blockchain is it going to be deployed? Tron? BTTC? Both?
Any sneak peak of the graphics?

Hi Fabslts, thanks for the reply, currently it will be only deployed on Tron.
Tentative designs will be added by tomorrow.

Great, thanks for the answer

Yeah, great, we need many more play to earn games like this, personally, i thinking people still love simple games like Snake, supermario, games in the google chrome when we went offline ,

So we want the barrier to entry as low as possible so we are going to use TRX and even if the user doesn’t have TRX or any token they can still play the game for Free.

Yes Binulaj, we are trying to create an engaging game that is simple and easy to start playing…

@0xhrushi Gamefi is a getting a lot of attention on the Tron blockchain so no doubt this will do well if it gets traction.

Can you say how you plan to generate revenue for the play to earn as you say you will have large giveaways? where will you gain funds for this aside from funds gained possibly from the hackathon season 3?

Whaou cool! If you need beta testers count me in

Sure, will love to beta test with you guys

So we will be charging an entrance fee for our daily tournament which will have a predefined max prize distribution. If more people enter the tournament we will get more revenue.

And as for gain funds we are exploring that option currently

Fantastic! I’ll be excited to join in the beta testing!

I will be excited to join too

@0xhrushi Thanks for the update so sort of a IG Galaxy set up? can projects also in a similar way sponsor you for tournaments for example and have the contest season named after them for promo?

The design looks very nice. I would definitely like to see the final version!

Not currently, but Yeah maybe we will add that feature after this hackathon

@0xhrushi Nice one, it would allow another type of sponsorship and revenue

Looking forward to seeing this progress

Always love to play Games. If it’s on Web3 it’s Even Better. Looking Forward To it.

Thank’s Adithya, would love to see you guys play the game

I hope u realized ur goals, good luck guys