goStables - Decentralized Stablecoins for the Caribbean

Project Goal: To enable new business models and opportunities for many on Tron through the creation of decentralized, collateral backed stablecoins for countries within the Caribbean.

There are many in the Caribbean region experiencing difficulties to access foreign currencies due to foreign banking de-risking policies and other FX issues. However, using gStables pegged to the real world, allows anyone holding that gStable to redeem that USDD anytime at the market rate. The existence of such locally pegged stablecoins can also facilitate greater blockchain user onboarding, by bridging the gap between digital currencies and national/cultural familiarity and context.

While CBDCs may expand further within the region in the near future, there is still a need Now, for decentralized stablecoins as they can provide many, with options for economic growth and inclusion along with a greater propensity to fuel an innovation and adoption wave on publicly accessible blockchains. Tron Blockchain, known for its speed and very cost effective transactions is already home to many US dollar pegged stablecoins. The introduction of USDD enabled a means for us to ideate/develop solutions like goStables Protocol on top of this over-collateralized stable asset (USDD). 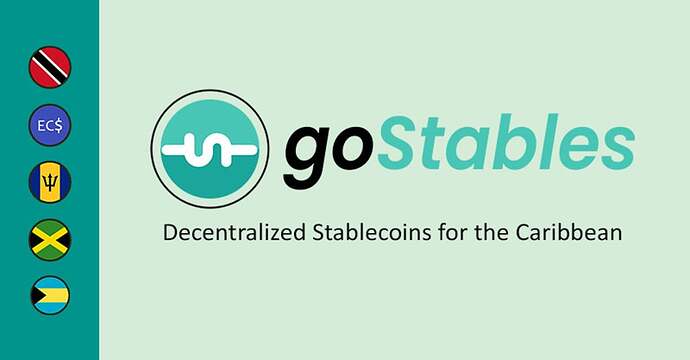 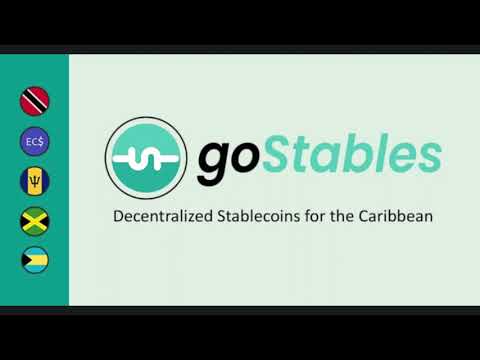 Contribute to gostables/smart-contracts development by creating an account on GitHub.

The protocol has 3 core features for users:

The protocol has 2 core means of generating revenue and strengthening its USDD collateral reserve over time:

Additional strategies will be employed in the future.

Project Milestones:
The following will be completed for the hackathon:

Please comment if you have any questions or suggestions for us! Thanks and Cheers!

Why would Caribbean companies/individuals mint your stable coin instead of just using USDD directly?

Heya
Thanks for the question!

Hope this answers your question. Let me know

is it finished soon? 2 weeks til deadline

It’s going to be tight as we had a late start. However, we’re aiming to have the functional MVP on Nile testnet before deadline (between 10 - 12th Nov).

The landing page will be shared in a few days.

That will help for sure giving more utility to USDD. But I’m wondering why it is done on a regional (Caribbean) ground and not national then? Are you planning to launch one stable by country? What if each country decides in the future to have their own public stable coin?

Sorry if the questions are stupid

just trying to understand your vision of the crypto future for those countries.

Good questions. You can consider me as 1 from the public of T&T deciding to create a local gStable pegged to the local TTD. We’re launching with gTTD (Trinidad & Tobago) first but the intention is to deploy gStables for other Caribbean countries - gXCD, gBBD, gJMD, gBSD, etc - next year. This brings blockchain/defi inclusion for the many countries in the region via their own native stablecoin.

I was going to wait until tomorrow when we had an image for the hero section of our landing page ready, but considering it’s a short time til the hackathon deadline, and it’s better for folks to familiarise themselves with our project and to see progress, I’ll share it now (also updated my OP with link): 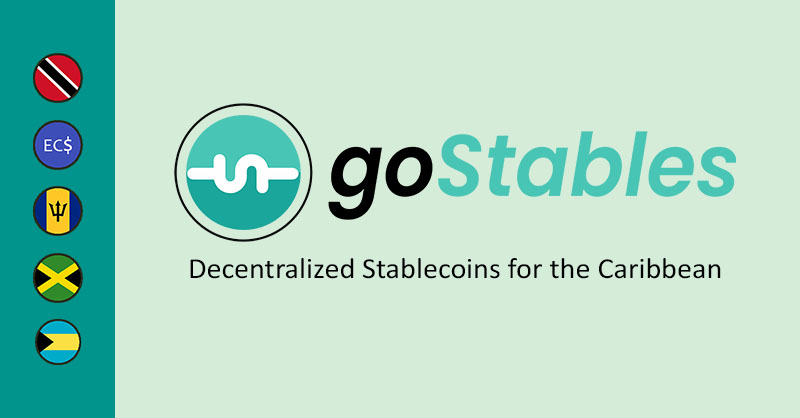 Mint, trade and earn from gStables which are a collection of USDD backed, Caribbean stablecoins pegged to real world exchange rates. On Tron Blockchain.

Tron is one global public “computer” - a great platform to build shared online->offline experiences with powered by web3. We see the goStable protocol as a necessary defi component for more from the Caribbean to onboard to the blockchain space. This could enable others to organise online to buidl and use their varied gStables (like a basket of collateral) to mint a new Unified Caribbean settlement stablecoin, if they/we decide to. We could experiment with various online micro-economies and social-defi with stuff like this.

Hey all, if our protocol interests you, please follow us: 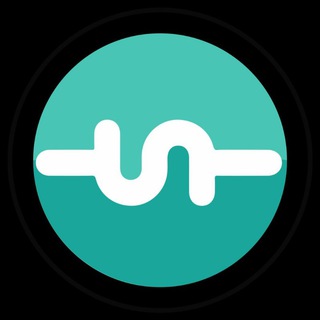 You can view and join @gostables right away. 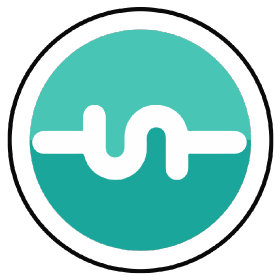 goStables has one repository available. Follow their code on GitHub. 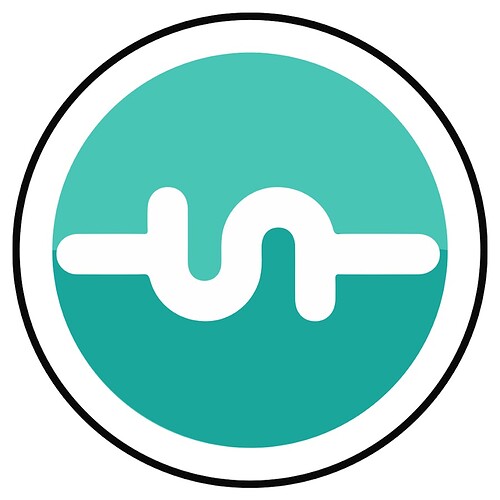 Share your videos with friends, family, and the world

Here’s some screens of our progress: 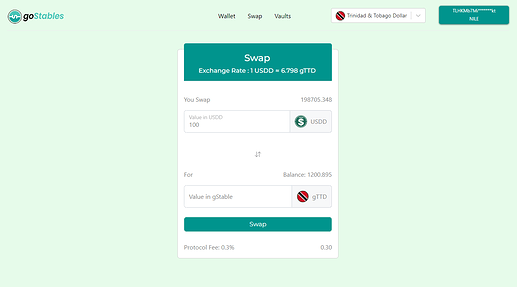 Vaults - Stake USDD to earn a share of the protocol fees

Greetings wecosmic! Your project seems to be missing details on the following. Please add them to your project. Thank you!

I’ve updated my OP with:

We’re currently working on setting up the price oracle to get reliable offchain prices of Caribbean currencies.

Video will be coming soon as well as the link to the frontend dApp.

I love the post-hackathon details, I pray you guys succeed…

Nice project but i would want some clarifications into these questions.
Will the gstable be backed by something as we know some stablecoins to be backed by real dollars, gold etc.

Also will it have a max supply like bitcoin.?

@Nana66419 gStables are crypto native stablecoins which are backed by USDD, which in turn is backed by other foundational crypto assets such as BTC, TRX etc. You can read more about this on our landing page (link above).

There will be no max supply, new gStables only comes into existence on-chain due to demand+collateral. It is decentralised so anyone can mint them with the requisite crypto asset (USDD in this case).

There will however, be a debt ceiling that would be a protocol governance aspect in the future that would limit minting gStables when the protocol begins using non USDD assets as collateral.

Also key to note: The gStable token smart contract (see docs+Github links above) has a “whitelisting” setClient function which enables us to add approved contracts using collateral beyond USDD (onchain or offchain) to mint gStables. This is particularly useful for new vault mechanics In the future, post hackathon+funding+usefulness, where we can enable anyone to mint X% of gStables by depositing BTC, TRX or ETH into those new vaults (this is where the debt ceiling aspect comes into play).

Many other highly experimental possibilities can come into play here if there’s enough protocol traction and usage, for instance with hybrid on/offchain collateral. What if someone decides to seriously fund/setup a goStables neo atm/remittance network regionally that “uploads” local fiat into gStables . That someone could stake X - BTC or TRX to a private vault that provides them minter access. Their debt ceiling starts at a base value and grows dynamically based on offchain ATM data brought onchain verifiably + other set parameters.

This is very great. Cant wait for it to be successful and run on a full scale to be able to use in my country too. If all monies were in this format, for me personally it will help curb this super high inflation we are facing. Wishing you the best in this hackathon and will be checking you guys from time to time for updates.

Appreciate your interest and questions

The dapp link will be shared in a day or 2

Hey all we’ve updated our OP Submission with the link to the dapp on Nile testnet. Have a look and tell us what you think?

You can check the docs link above for an easy to read guide on how to use it. 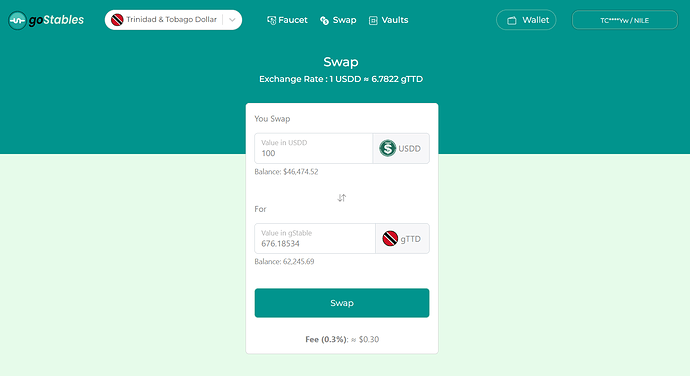 Hey all OP is updated with video guide.
We have completed all the submission requirements and have successfully delivered an MVP.

Central banks and currencies of the Caribbean

This is a list of the central banks and currencies of the Caribbean. There are a number of currencies serving multiple territories; the most widespread are the East Caribbean dollar (8 countries and territories), the United States dollar (5) and the euro (4).

I’m curious, what other regions would you like to have gStables for, in the future?

Hey all, we’ve completed our submission on Devpost. OP updated with link.

Here’s a preview of what’s to come in the future, post hackathon:
*Update we’ve switched to Wallet v0.6 check it out: 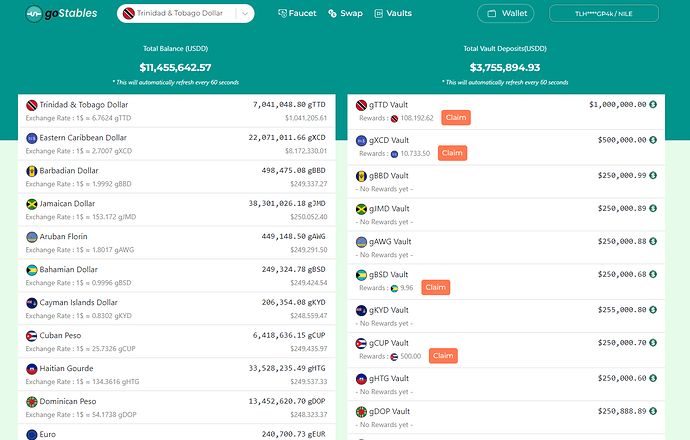