Project Goal
It is a Telegram bot that allows any energy provider, no matter its wallets size, connect his customers base to his available energy in an automated way. The energy provider grants this bot un/freezing and voting permissions over his wallet and it does everything from the very beginning until the end. It has no risk because the bot doesn’t have any other permission and it works via multisig: the private key will never be shared. It allows the seller just chill and let the bot do everything for him.

Project Details:
The buyer talks to the bot and can check how much energy is available at the moment - the bot checks on the blockhain this info. 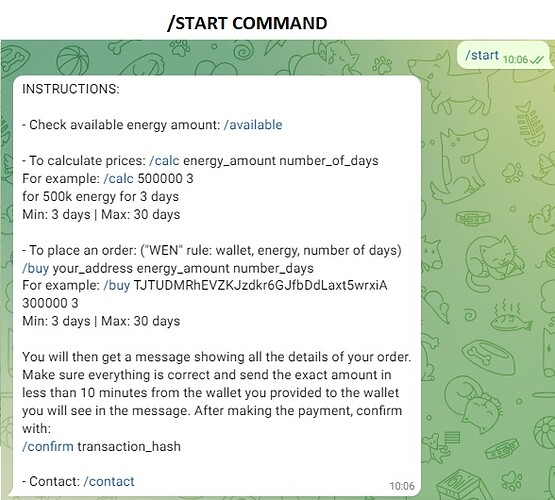 Then, the buyer can ask the bot for the price of renting at any time range he desires. Previously, the energy provider set his selling fee and the maximum period he’s willing to sell (for example: from 3 to 31 days). So, the buyer can check automatically how much will be renting 300K energy for 14 days, for example. It’s really good because TokenGoodies only allows the minimum period (3 days) and this bot supports long term deals. It is remarkable that the bot also checks if the buyer has an ongoing deal with the energy provider in which the TRX are still frozen, so the previous TRX won’t be “renewed for free” with the new order - it adjusts the price accordingly. 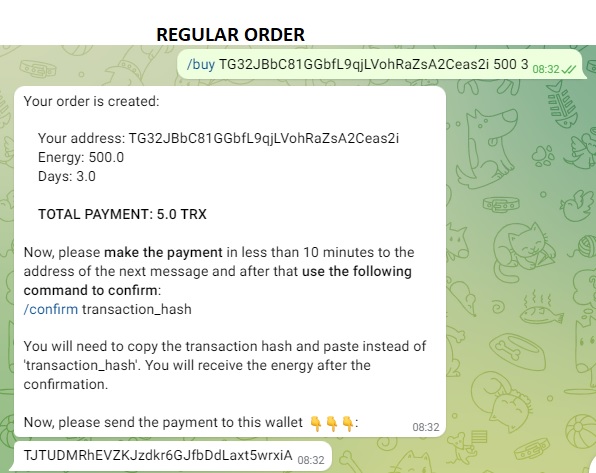 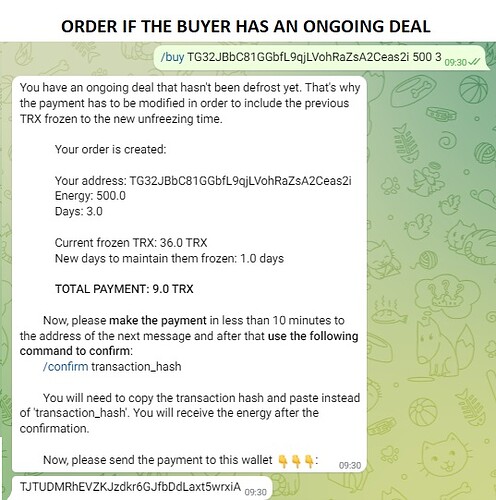 If he agrees, then he can place a buy order, typing his wallet address (where he will receive the energy), the energy amount and the number of days. He will have 10 minutes to make the transfer and send the confirmation hash to te bot, who will make several checks to confirm the transaction is OK (the wallet address is the same than he provided, the payment amount matches, the hash has not been used before for confirmation - so no double buy without actually paying is allowed, etc.). 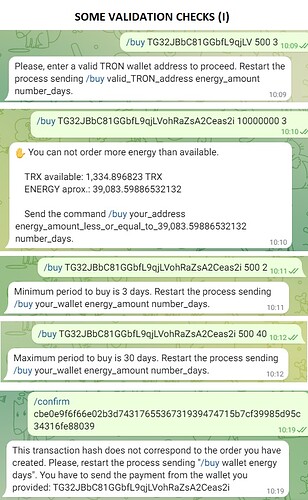 When confirmation is given, the bot freezes the corresponding amount from the seller’s wallet to the buyer’s, and then transfer the % payment to the energy provider, and other % to the developer (~10%) for maintenance fees.

Every hour, the bot also casts votes to the SR that the seller has decided if there is any vote to cast (this time frame can be modified by the energy provider), and every 5 minutes it checks if there is any “defrostable” amount based on confirmed deals with their own durations. If so, it unfreezes them.

It’s also remarkable that the energy provider can still freeze for himself or other separate deals without interfering the bot activity, because it will only unfreeze the orders that have been placed through it.

To sum up, the bot automates the whole process and allows more flexibility regarding prices and durations.

Next steps: Further steps are developing some commands for the energy provider so he can change settings by himself (current version requires them to tell me their sell rate and the SR they want to vote for at the initial configuration of the bot), and also a command so they can see their open orders and buyer wallets, so they can organize their assets checking unfreezing date for every order. I also want to expand this to bandwidth rental, not just for energy.

Update: “/status” command already developed! It’s only available to the energy provider and it prompts the basic variables he has settled (fee per 100K energy/3 days – lol, the rate of 1000 TRX was just for the test – and which SR to vote to), and the ongoing deals he has. 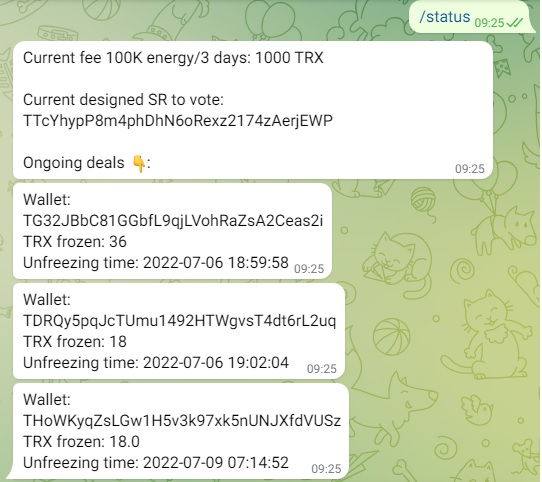 Update
Next steps:
Combining several energy providers together like a pool, to offer the combined energy. I mean, if there are 3 whales with 30M, 15M and 10M energy, the bot would offer 55M (but without disclosing the whale it belongs to). The buyer buys the amount he wants and: the whale who freezes gets 90% of the fee and the other 10% is distributed among all participating energy providers, proportionally to the energy they provide to the “pool”, so there might be some incentive to join because you’ll always get paid no matter if the energy is yours or not, and if you provide more energy, the more you’ll get because you receive the 90% if it’s yours. It would be like a Telegram energy pool.

Is it available right now?

Good initiative. With this, the current barrier experienced by Tron energy buyers will be addressed. Good luck in the hackathon and best of luck with your project goals

Thank you very much! I’ve learned a lot and still so much to learn, but I’m willing to continue on the road

Update : “/status” command already developed! It’s only available to the energy provider and it prompts the basic variables he has settled (fee per 100K energy/3 days – lol, the rate of 1000 TRX was just for the test – and which SR to vote to), and the ongoing deals he has.

this one looks like a sure win for the community and you say its available to use?

let’s hope for the best, although even if I don’t win, at least I build for the community

Yes, I’m starting to accept new energy providers but very slowly to make sure everything works as it should.

@Deiva Nice one however always aim to win

Thank you very much!

New commands available for admins (energy providers) so they can now change their fee and SR to cast votes to by themselves everytime they want to.

Awesome! Keep up the good work

Very nice! Something a lot of people can use!

This is a very cool idea, I really like bots when made well and secure and something like this is very usable. Great job

Love to see what else can be implemented in the future!

Thank you for your encouraging words

Very cool idea! One question I have is from personal experience on Telegram is that there are scammers everywhere and fake bots. How can you ensure users and projects using this bot will know it’s the legitimate one and not a malicious bot?

Cause Deiva is a trusted member of Tron community and a bunch of Tron active users support her initiative.

Besides, you can go on Tron official main group and type the commande
#police [name of a project] and see if it is legit or not (if the project was added as legit or scam in the database)